As far as traveling goes, I had dreams of going to two faraway places. The first of those dreams to come true was a trip to England. No matter that I was in education and took 17 teenagers along. I had my opportunity to visit England. 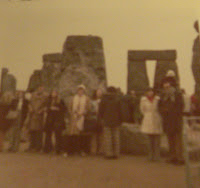 Yes, I saw where the Magna Carta was signed, the Thames River, Shakespeare’s birthplace, skeletons of buildings damaged during World War II, Big Ben, Buckingham Palace, and Stonehenge. How did they get those giant rocks there? The nine days I was there the sun never showed itself. You can tell that from the photos.
I knew about England’s reputation for drizzling rain and dampness so I took my raincoat (a London Fog one!). But it was March and pleasant when I left home and I didn’t factor in the temperatures plus the dampness and so took no gloves. That was the first thing I had to purchase; they were green and white wool that matched nothing else I had brought. Most everything in the clothing stores were woolen and it was March for goodness sake! 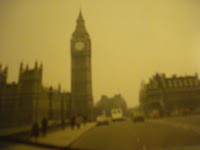 That trip gave me lasting, good memories, except for the weather and at the changing of the guard at Buckingham Palace. The military on horseback wore their winter gray attire, not the red ones I had hoped to see.
Where did my second dream trip take me? We'll talk about that another time. 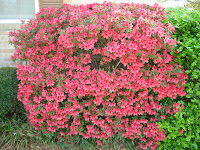 But look at what I saw in my own yard today...in March!