This month gave us several commemoration events about Abraham Lincoln. President Lincoln was assassinated by John Wilkes Booth on Good Friday, April 14, 1865 at Ford’s Theater in Washington. Booth escaped the theater but later was found and shot. After 146 years we probably think we know everything about the assassination and about Mr. Lincoln. We certainly know much about his youth in Kentucky, how he studied, that he worked on a farm splitting rails for fences, that he married Mary Todd and they had four boys but only one of them lived to adulthood.

Now Robert Redford in his film, The Conspirator, tells a story about a bit of history we’ve never heard about: the killing of President Lincoln was the result of a conspiracy among Booth and eight others, including one woman, all Confederate sympathizers. All were arrested, tried by a military commission and convicted of a conspiracy. How will Redford’s conspiracy story resound among Americans? Do we learn our history from the movies; e.g., Gone With The Wind? Only time and much discussion and digging into history will tell.

There’s another bit of history, which is factual and that few know about. President Lincoln was in the geographical area where the borders of southeast Kentucky, southwest Virginia and Tennessee meet. You might not know that he expressed concern about the people’s poverty there and wanted a school built in the area so the youth could have access to an education. He envisioned "a great university for the people of this area" in the Cumberland Gap.
In 1897, Lincoln Memorial University (LMU) became the heir of that dream. Nestled in the pristine Appalachian Mountain range, LMU's main campus is in Harrogate, TN, and the school operates 12 extended sites in surrounding areas. 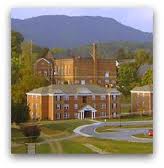 In that gap in the mountains now stands the school Mr. Lincoln hoped for years before. He would be pleased to see the 1,000-acre campus that honors his memory. The school is privately endowed and offers undergraduate, master, and doctoral degrees.


I’m a proud graduate of Lincoln Memorial University. Thank goodness for President Lincoln’s vision, which is now a beautiful reality.
"The best thing about the future is that it comes only one day at a time.” –Abraham Lincoln
How long have you continued to hope for something?