Big or Little--Does It Matter? 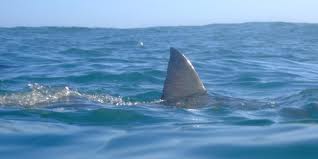 This past week news about sharks claimed some headlines.
The second shark-bite incident on the North Carolina coast this year happened recently. This second one involved a six-year-old girl on a boogie board in 18 inches of water. Her mother stood ten feet away and witnessed the attack. Lifeguards were not on duty. She screamed and the child’s daddy rescued his daughter from the water, her lower right leg and foot gashed open, exposing the bone. He held the gash on her leg together until paramedics arrived. Two days later she was reported in good condition, but had not walked yet. 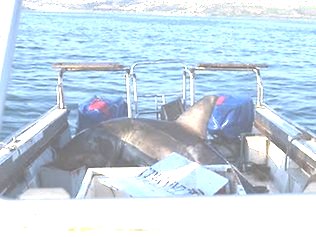 Also reported last week was an occurrence on the coast of South Africa. Marine scientists studying sharks there heard a splash and saw a great white shark leap out of the water and into their boat. The group’s co-director said the shark could have mistaken the boat’s shadow for prey. No injuries happened but they had to return to shore and have a crane lift the shark out of the boat and back into the water. 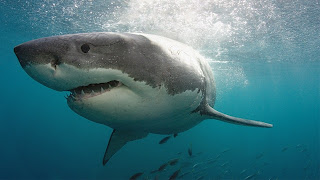 Most of us probably saw the movie “Jaws.” It was somewhat unnerving even though I knew it was not an actual shark; surely not one that big. But, you know, a shark bite is a shark bite no matter the size of the shark. Sorta like when I had a heart attack and the doctor said it was a little one; I  asked him if that was like being a little pregnant. He didn’t smile. The treatment was the same as any heart attack, including six weeks in cardiac rehab.

But I digress. A shark is a shark and the ocean is their playground. If you go into their playground please be aware of the risks. This blog post will not give you hope of never getting a shark bite—unless you stay on the sand and listen to the waves crash against the shore, watch the subtle white caps far out, and collect sea shells. If you really want to see a shark go to Sea World or a big-city aquarium. So don’t worry about the dangers at the seashore; instead enjoy the beauty.
"Worry gives a small thing a big shadow." —Swedish Proverb
Till next time …  keep on smiling.
Posted by Jo Huddleston at 7:00 AM