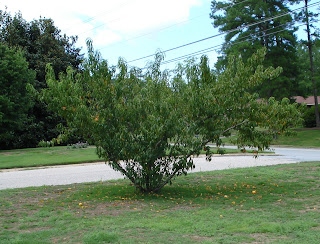 In our yard we have a peach tree that must have thought it was born a bush. Instead of having one trunk with branches, our peach tree has several “trunks” that emerge from the ground. So it looks like a bush, and not a very pretty bush at that.
I’ve wanted it chopped down; until the bush begins to bear fruit. And does it bear the peaches. At its fullest the branches literally bend under the weight of the peaches until they touch the ground. I don’t eat peaches but the neighbors who walk by know they are welcome to take a few with them and they do so almost daily. 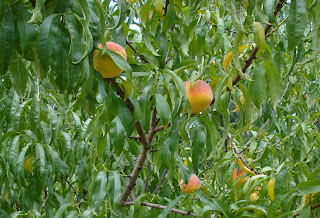 We let the tree grow its own way; no pesticides or anything and the fruit is beautiful. This year the peaches are larger than ever and more plentiful. Each year the peach crop overtakes the tree and even some fall to the ground. We have other neighbors, really residents, who take care of the ones on the ground and also on the branches.
Yes, another of God’s little creatures—the squirrels. As unattractive as the peach tree is, we’ve decided if for no other reason it’s there to help feed the squirrels, then it stays. I watched as a squirrel scurried away from the tree carrying a peach bigger than its head. There’s one squirrel that is intent on eating his peach on the top railing of our deck. I marvel at the process. 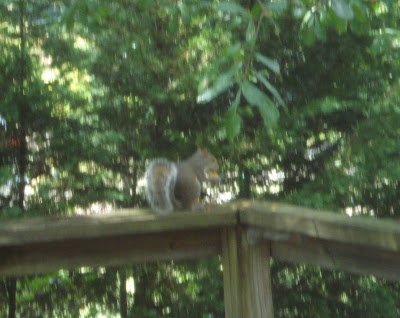 First he peels the peach. He peels it! One little strip at a time. So neat and precise. What patience he has not to start eating, but he continues until the peeling is finished. Then he eats. Those two little hands holding the big juicy peach. Later, we find the peelings and the pit at the spot on the deck where the squirrel had his delicious desert. Once I saw him lying atop the deck railing, all four legs hanging off the wood—pure contentment with a full stomach.
So, the peach tree/bush stays. Knowing it can bring pleasure to even one little squirrel is enough not to chop it down. Watching the squirrels carry, peel, and eat our peaches is truly watching a miracle. And that’s something that money can’t buy.
“It's good to have money and the things money can buy, but it's good, too, to check up once in a while and make sure that you haven't lost the things money can't buy.”
—George Horace Lorimer, former editor-in-chief of The Saturday Evening Post