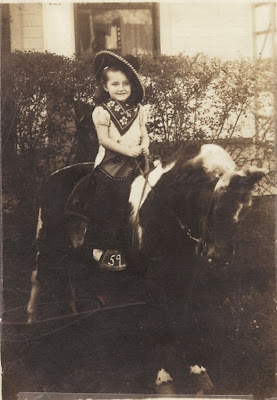 That little girl in the photo to the left is me. And that weak smile covers immense fear. That’s as far off the ground I’d been without an adult holding my hand. I didn’t want to be in that saddle on that animal bigger than I was.
In retrospect, that day may have been the beginning of my fear of any large living thing. This would include horses for sure. As I grew, some of the things I’d feared became smaller and fear of them lessened; for example, little dogs. But the big dogs when I was young still look big to me now and I steer clear of them if they don’t know me.
A few things that aren’t living beings are also on my to-be-feared list; or at least to-be-uncomfortable-around list. Poison ivy, being put to sleep for surgery, exhaustion, death of a loved one, and the dark. Even now I require a light left on someplace in the house at night. And I keep a flashlight at my bedside.
Not to be irreverent, but my burial plot is as close to the center of the cemetery as possible. At that location there is a flag pole where an American flag flies 24/7. At night a spotlight shines on the flag. I speak jokingly with my family that I won’t be completely in the dark after I’m buried. Oh my goodness, now you know the real me!
But that photo above is the epitome of “two-faced.” I present the appearance of enjoying what I’m doing but in reality I wanted anything except being where I was. Haven’t we all been two-faced at least once in our life?
Have you been “two-faced” in any situation? Can you harness your fears in certain circumstances so that others don’t see the real you?