Which Is The Good Snake?

Monday Musings on This ‘N That
What’s your favorite snake? What … you don’t have a favorite snake? And so many to pick one from … there’s the copperhead, rattle snake, water moccasin, black snake, chicken snake, and many more, I’m sure.
When my son was young we were at Silver Springs, Florida and he wanted to go into the snake show. AND he wanted to sit on the front row, which we did! The first thing in the show was a person who brought out a huge snake, holding it in his hands, and walking along the front row to allow spectators to feel of the snake. My son did; I did. Not once thinking that the snake could turn his head and BITE someone if it wanted to. It didn’t.
Anyway, that’s the only snake I’ve touched and don’t plan to touch another one. Returning home one day I noticed a very small snake lying just outside the garage doors. I got out of the car, reached for a hoe standing in the corner, and set out to kill that little snake. I raised the hoe above my head and slammed it down near the snake’s head. When the hoe hit the concrete beneath the snake it bounced back up almost as high as I had it when I started my killing spree! Good thing it was a little snake or it would have had time to bite me before I could bring down the hoe to hit it again.
Okay, then, what’s my favorite snake? A good snake; and a good snake is a dead one. Take a look at this one my son found inside our garage a few days ago. I’m glad he found it instead of me; I might still be running. 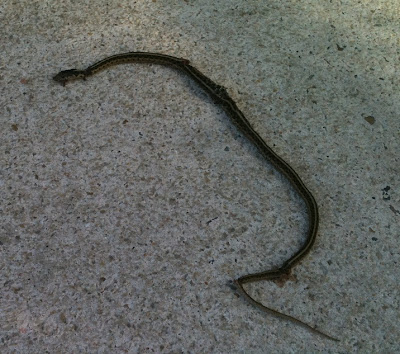 My son used the same hoe and chopped the snake two or three times. He googled it and determined it was a garter snake; not poisnous. But still the only good snake is a dead snake in my book.
Till next time … keep on smiling (and don’t bring any snakes to my house!)
Posted by Jo Huddleston at 7:00 AM