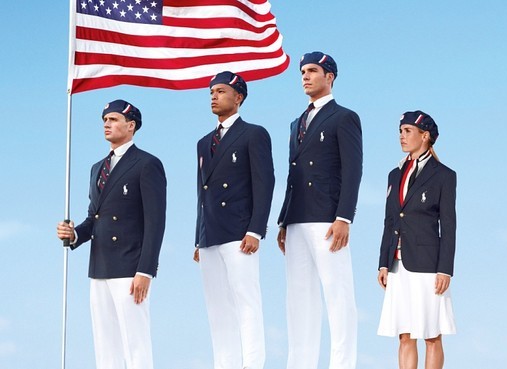 U.S. Senate Majority Leader Harry Reid (D-Nev.) responded unfavorably to this discovery. “They should take all the outfits, put them in a big pile and burn them and start all over,” Mr. Reid said, apparently angry that Ralph Lauren had chosen not to throw the business at the U.S.’s struggling textile industry. “If they have to wear nothing but a singlet that says USA on it, painted by hand, that’s what they should wear.”

China’s state-run Xinhua News Agency retaliated by condemning the “narrow nationalism and ignorance” displayed by U.S. politicians who oppose the Chinese-made uniforms. That agency cited the importance of “the Olympic Spirit, which has nothing to do with politics” but is instead about “mutual understanding and fair play.”
One issue is, of course, money. Other countries receive government funding. The USA Olympic Committee does not receive government funding, but relies on private contributions and corporate sponsorships. The expense of producing the uniforms in the U.S. would likely have doubled their cost.
Another issue is this discussion is politics. U.S. unemployment is an issue for American politicians in this election year. Both Republicans and Democrats readily point fingers at China as the bad guy in the disappearance of American factory workers.
Last week, Ralph Lauren bowed to the pressure, releasing a statement promising that all future Team USA uniforms will be made in the U.S.
Were Mr. Reid and other critics correct to demand that patriotism trump cost considerations? Or are they guilty of trampling on the Olympic spirit for political gain?
What do you think?... Burn them or wear them?

The winner of last Thursday's blog post for a copy of A Promise for Miriam by Vannetta Chapman is Kay. I'll email you to get your mailing address and get the book out to you. Thanks all for commenting. Watch for more book giveaways.

Till next time ... keep on smiling.
Posted by Jo Huddleston at 5:00 AM