Hurricane season is nearing its most active part of the season. From now through September, with the peak in mid-September, is the time for more numbers of hurricanes. America's Southeast and Eastern coastal areas are the places where most destruction is possible.


Have you ever been in or near where a hurricane touches land? I have not but I have been required to go to a land area after devastation from a hurricane coming ashore. Along the Gulf of Mexico's shoreline folks have to follow on the weather channel carefully, keeping an eye on the projected track of a hurricane advancing into warm Gulf waters. 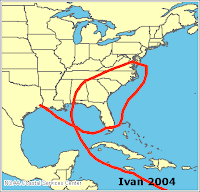 In 2004 the eye of Hurricane Ivan hit Gulf Shores, Alabama. The circulation of a hurricane is counter clockwise, which means that land areas east of the eye receive the most damage. On September 16, 2004 Hurricane Ivan spread its damage eastward toward Pensacola, Florida. Our family had a small, one bedroom beach-side condominium located in the line of Ivan's destruction.


After Ivan had spent itself, the manager of our condominium complex telephoned me to say, "Your unit is gutted." Hesitation. A loss of words. She continued to tell me devastation was spread from one end of our island to the other. She said we should come there when we could to try to possibly salvage anything. She said to wear rugged boots because there was glass and lumber with nails strewn everywhere.


I hadn't thought about what we would find upon arrival at our tiny condo. I just usually don't anticipate/worry about things I have no control over. The destruction was so awful we could not go onto the island from the east but had to drive through Alabama and onto the island from the west. Even at that we had to show law enforcers proof that we owned property on the island before we were permitted to cross the Alabama/Florida line.


As we drove the mile into Florida to our complex what I saw reminded me of the aftermath of a war zone. People's destroyed belongings stood in rows and stacks on either side of the road, which was now just a narrow sandy roadway. All power lines and most power poles were down. Sewer pipe lines were buckled above the sand. When we arrived at our place we parked away from the buildings and walked around to the beach-side entrance to our ground level unit. I was not prepared for what we found.


Yes, as the manager had told me, our little unit was gutted. No longer did it have its sliding glass doors onto the patio, all of the furniture in the living room and dinning area had been swept ahead of the water and all pushed to the far side of the unit, all pieces of furniture piled up against the front door. In the kitchen the refrigerator had floated to an abnormal position and in the bedroom the bed had floated and when the water receded it landed at a forty-five degree position from where it was before the waters had rushed in. I saw no evidence of our TV and found one of our dining chairs down the way lodged in shrubbery. Where the pool had been was now only level sand and the perimeter pool fence was nowhere to be seen.


Every ground floor condominium was a total loss and a part of one building nearest to the ocean was destroyed. Our building was moved one-plus inches off its foundation. Some disagreements occurred between insurance companies whether the damage to our unit had been caused by wind or flood. The flood would not have occurred without the hurricane's wind pushing it, they argued.


The end of the story is that we now have the insides of a new condominium from the wall studs out (because of mold), new furniture, appliances, drapes, etc. Yes, we had insurance to cover our contents. It was about eighteen months after Ivan before we could use our condo again.


So each hurricane season since then I watch the weather channel looking for news of impending disturbances in the tropics. We now have Ernesto and Florence headed to the Gulf of Mexico area and another disturbance just coming off the African coast. It appears Ernesto will travel toward Mexico and Texas and Florence is not near enough to guess where it will hit land. 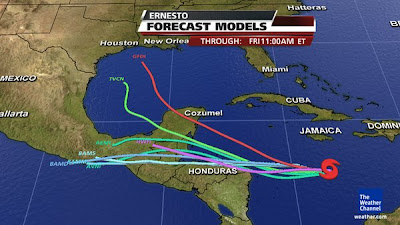 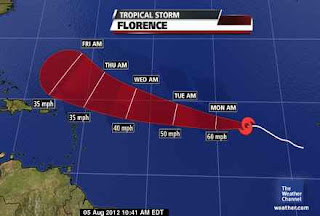 Evacuation routes exist for folks at the beach if a hurricane gets too close. If I'm there I plan not to wait until evacuation is ordered but return home as soon as the storm enters the Gulf.


The winner of last Thursday's blog post for a copy of Living in Harmony by Mary Ellis is Cherri. I'll email you to get your mailing address and get the book out to you. Thanks all for commenting. Watch for more book giveaways.

Till next time ... keep on smiling.

Email ThisBlogThis!Share to TwitterShare to FacebookShare to Pinterest
Labels: coastlines, destruction, hurricanes, it's the season, Ivan