When you leave a comment on THIS post by 6 p.m. CT Sunday, September 8, 2013 you'll be entered in the DRAWING for a copy of the book mentioned below. If you mention in your comment that you’re a follower (see in the left column “Join This Site” and “Follow by Email”), I’ll add your name a second time in the drawing. You must be eighteen, have a U.S. mailing address, void where prohibited. You can read details about my book giveaways at Disclaimers.

Tokens of Promise by Teresa Pollard 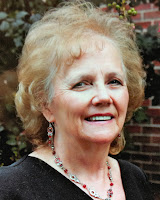 Teresa Pollard has a Master’s degree in English and Creative Writing from Hollins College, and serves as a Sunday School teacher. Married for forty years, she was devastated by divorce and the death of her youngest daughter, but God has blessed her with a new life in Dacula, Georgia.

Welcome, Teresa. Please tell us a little about yourself.
I’m sixty-three years old, and the mother of three children and grandmother to fourteen. I grew up in Richmond, Virginia, but now live in Dacula, Georgia. I have a Master’s degree in English and Creative Writings from Hollins College (now Hollins University). I was saved at twelve, and I’ve taught Sunday School for most of the last forty years, mostly to first and second graders, but now to a fantastic group of ladies my own age or thereabouts (meaning from 55 to 85).

What 4 fun or unique things can you tell us about yourself.
1.    I’ve traveled to England, Germany, Italy, Mexico, Canada, Honduras and Romania as well as to 40 of the fifty states.
2.   I’m severely left handed.
3.    I’m a Scrabble, Sudoku, & Crossword puzzle fan (not quite fanatic, but close.)
4.    I’m directionally and technologically challenged—I can get lost even going to places I’ve been dozens of times, and my kids laugh because I still can’t program the DVD player or fix the satellite remote when my grandson knocks it off the station .

What do you enjoy doing when you’re not writing?
I’m an avid reader of just about any kind of fiction. I love to sing and play games like Scrabble, Trivial Pursuit, Sequence, etc. with friends. I love movies that are fun and uplifting or a good suspenseful mystery (but not horror).

How did you become involved in writing?
Believe it or not, on a dare. A friend had given me a grocery bag full of Harlequin Romance novels, and I complained to her that they all had exactly the same plot. I said I could write a better story than that, so she dared me to do it.

Where do you write? Do you have a corner, nook, or a dedicated office?
In my bedroom. No, just a desk and a computer.

Do you always know the title of a book before your write it?
That’s a good question. Sometimes, but the original title for Tokens of Promise when it was written in 1985 was simply Tamar. My publisher and I both agreed that it needed to be changed since there are a couple of Tamars in the Bible, and other books have been written about them with that title.

Tell us about your book. 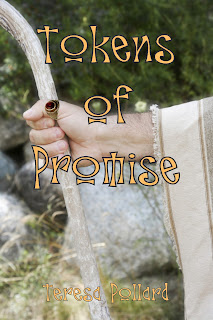 Tokens of Promise is the love story of Tamar and Judah from Genesis 38. Coming to Chezib to bare his soul to the Man of God there, Judah sees Tamar, a beautiful young woman being severely beaten by an evil slave trader. Redeeming her for her family, Judah discovers that the entire town expects him to marry her. This is something he cannot do. He has sworn never to have but one wife, and he is already married with two sons, and a third due any moment. Yet he cannot deny his attraction to the beautiful Tamar. He decides to take her home to marry his eldest son, Er, not realizing his son’s evil nature. When God kills Er on their wedding night, Judah announces that Tamar must now marry Er’s brother Onan. When Onan also is slain, Judah sends Tamar home to her father, supposedly to await the coming of age of his third son, Shelah. But the time comes and passes, and not wishing to die like his brothers, but knowing his father’s feelings for Tamar, Shelah comes to Chezib to release her from her bond to him, and together they come up with a plan to make the now widowed Judah discover his own feelings. But the plan doesn’t go quite as expected as Judah has Tamar tried before his family council as a harlot and the torches to burn her alive are already lit.

Book’s Back Cover Blurb:
“Beware, Prince of Hebron, her witching ways are strong.” Ben Qara’s evil words still rang in his ears. Judah is sure he was bewitched by the beautiful Tamar. She is all he can think about. But no, it must not be. He will not break his vow to Yah. He already has a wife, and he will have only one. Tamar must marry Er.

Rescued from disgrace by the handsome Judah, Tamar is already in love with the kind stranger. She eagerly followed Emi’s advice on how to win him. It almost worked. He’d promised. If only his servant hadn’t come at that moment, she’d be his wife now instead of going home with him to be his daughter-in-law. Why had her father agreed to this? Surely he could see her destiny was with Judah.


Where did you get the idea for your book?
In 1979, I had decided to read the Bible through from cover to cover for the first time, but I hadn’t gotten very far at all, obviously, when this story just flew off the page at me. I looked the passage up in several commentaries, but they all seemed to say that the story was merely a “meanwhile back at the ranch” break in the Joseph narrative, and it had no meaning. I simply didn’t believe there was any such thing as a meaningless story in the Bible.

Did you have to do any research?
Yes, lots! I even studied Hebrew for a year so I could do a word-by-word dissection of the story. I read the Talmud and every bit of scholarly comment I could find.

How long have you been writing?
I wrote my first novel (not this one) in 1979.

What advice would you give to writers who have waited a long time for an editor or agent or publisher to notice them?
Never give up! Don’t be discouraged! And don’t stop writing either! If it’s meant to be, in God’s time, He’ll make it happen! But don’t just sit back and wait either. Sharpen your skills. Get involved with a writer’s group. Go to a writer’s conference. For thirty years I didn’t even know there was such a thing as a Christian Writer’s Conference, much less that it was held right in my back yard, so to speak. My first conference was where I met HopeSprings Books and began the process of publishing my first novel.

What are you working on now?
Candi Pullen and I have just finished a sequel to Not Guilty called Not Ashamed. We’re in the process of adding study questions and doing the editing on it.

What advice would you give to writers just starting out?
I guess I’d say write the stories you’re so passionate about, you can’t not write them. I’m not your typical writer. I’ve always said I was a writer who hated to write. I’ve never kept a journal, or written letters or any of those typical things. With me, it has to be a spiritual gift, because it certainly doesn’t come naturally, but when that story hits me, I can’t stop writing until I have it down on paper (or in my computer, the modern equivalent). Then I’d say go to a conference and network until you’ve found the place God intends you to find. Don’t wait thirty years like I did!

Where can we find you online?
At my website.

Any parting thoughts?
Thank you for the opportunity to share my story with you today. I hope you will enjoy reading Tokens of Promise. Far from being a meaningless story, it is the story of the redemption of Judah. The same man whose idea it was to sell his brother Joseph into slavery later offers up his own life to save Benjamin. This story is the reason for the change. Not only that, but the tokens—a staff, a cord, and a ring—are symbols of a prophet, a priest, and a king—Jesus! How is that possible in a “meaningless” story? Find out for yourself.

Teresa, thank you for spending time with my readers and me. One of my commenters will win a copy of Tokens of Promise, which you have graciously offered to my readers.


Remember: leave a comment on THIS post by 6 p.m. CT Sunday, September 8, 2013 and you'll be entered in the drawing for a copy of Tokens of Promise by Teresa Pollard. Please, please remember to leave your email address. I’ll need you email address so that should you be the winner I can get in touch with you. I’ll announce the winner in Monday’s blog.


The winner of last Monday's blog post for a copy of Firey Secrets by Stephanie McCall is squiresj. I'll email you. Thanks all for commenting. Watch for more book giveaways.