Leave a comment on THIS post through Tuesday, January 17, 2017 to be entered in the DRAWING for a copy of the book below. If you mention in your comment that you’re a follower (see in the left sidebar “Join This Site” and “Follow by Email”), I'll add your name a second time in the drawing. U.S. mailing address required to receive a paper book. I may or may not have read books offered for giveaways. The mention and giveaway of books on my blog does not in any way indicate any manner of my endorsement of said books. Read book giveaway details at Disclaimers. To provide you security, please leave your email address like this: johnATyahooDOTcom. Winner announced in next Thursday's blog post.


Katheryn Maddox Haddad was born in the north, but moved to Arizona where she doesn’t have to shovel sunshine.  She basks in 100-degree weather and enjoys palm trees, cacti, and her computer with the letters worn off.  With a BA degree in English and Bible, she earned part of an MA in Bible, including Greek studies.  She spends half her day writing and the other half teaching English using the Bible as a text book to Muslims around the world.  She has converts to Christianity in hiding in Afghanistan, Iran, Iraq, Yemen, Uzbekistan, and Somalia, Jordan, Palestine. “They are my heroes,” she says.

I hope people will spread the word about my book, Mefiboset, the Crippled Prince, to handicapped people everywhere. In this book, despite his severe handicap of paralyzed feet, he maintains a positive attitude and wit that is rare with most people, handicapped or not. He was an overcomer.

I had a lot of fun writing this book.  It was an absolute delight to write about Mefiboset, son of Crown Prince Jonathan and grandson of King Saul. It covers sixty years of his life.

You may have heard stories about the poor little boy who was crippled for life at age five, then forced to live in Lodebar, a desolate place in the middle of the wilderness.

I disagreed with nearly everything I had heard about him.

LITTLE:  I doubt he stayed little for very long. His grandfather was a giant, probably seven feet tall. When you look at pictures of six-foot men standing next to basketball players, they only come up to their arm pit. Saul was head and shoulders taller than everyone else in the kingdom. Surely his grandson inherited at least part of that bigness.

BEGGARISH:  Not only was his grandfather big, but Saul was the most handsome man in the land. Once again, surely Sett inherited some of that handsomeness.

SAD:  His father, Jonathan, had a positive attitude and even got along with his father’s rival, David. In my book, Sett had his share of enemies, but he was always doing things to turn his enemies into his friends.

LIVING IN DESOLATE PLACE:  First, we do not know how old Sett was when he went to live there. Second, Lodebar was ten miles southeast of the Sea of Galilee near an international trade route.

LONELY: Sett got himself a wife, and later a son, Micah. This son in turn had four sons. Mefiboset had a large family.

In my book, Sett was denied the throne as king of Israel and crippled for life at age five. He spends his early years fleeing his grandfather King Saul’s enemies. Sett uses his wits to get out of life-threatening situations in Israel, Babylon, and Assyria. Despite his handicap, the beautiful Kissara becomes his wife, King David becomes his friend, and the forests become his mission. Though he must constantly deal with three enemies who do everything they can to make his life miserable, Mefiboset, grandson of a king, is an overcomer, a climber, a conqueror who triumphs in the end.


Welcome, Katheryn. Please tell us a little about your novel, Mefiboset: Crippled Prince. 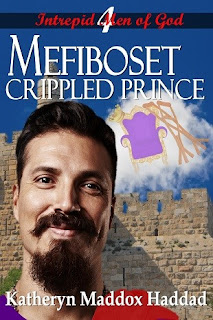 Denied the throne as king of Israel and crippled for life at age five, Sett spends his early years fleeing his grandfather King Saul’s enemies. Inheriting his gigantic grandfather’s height and good looks along with his father Jonathan’s positive attitude, Sett uses his wits to get out of life-threatening situations in Israel, Babylon, and Assyria. Despite his handicap, the beautiful Kissara becomes his wife, King David becomes his friend, and the forests become his mission. Though he must constantly deal with three enemies who do everything they can to make his life miserable, Mefiboset, grandson of a king, is an overcomer, a climber, a conqueror who triumphs in the end.

Any parting comment?
This book was written to inspire the physically handicapped as well as people who feel life has cheated them out of something important.

Leave a question you’d like readers to answer. (Commenters aren’t required to answer to be entered in the book drawing.)
Do you know anyone who is handicapped or feels cheated out of something important in their life? Would you like to share some things about this person with us? Let's talk about ways this book can be made available to the handicapped.

Sunday, January 15, 2017: Katheryn has offered a consolation prize to all commenters. Here's Katheryn's note: Jo, I am offering a consolation prize to everyone who enters - a free 2017 scripture calendar with a different scripture each day. I will send them one by email that they can photocopy and make as many copies for their family and congregations as they want. Or I'll send them a single print copy to their home.

Commenters, to enter the book drawing please leave your comment on this post through January 17, 2017 and remember to leave your email address so I can contact you if you’re the winner. (And if you want a single print of Katheryn's calendar, please include your mailing address in your comment.)


The winner of last Thursday’s blog post for a copy of Southbound Birds by Janetta Fudge-Messmer is Nancy. I’ll email you. Thanks all for commenting. Watch for more book giveaways. 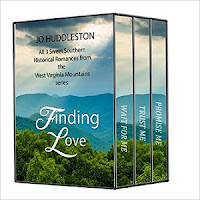 Now, altogether in one volume, enjoy all 3 sweet Southern romances in the West Virginia Mountains series. Beginning in the simpler, more innocent times of the 1950s and continuing into the chaotic early 1960s, these stories take you from the hardscrabble lifestyle of coal miners in West Virginia to the affluence of South Carolina coastal living. This volume includes eBook editions of three full-length novels: Wait for Me, Trust Me, and Promise Me. Available at Amazon.

Posted by Jo Huddleston at 1:00 AM